Organized by Marina Komiya and MEGUNINJA

58 texts from Sontag Susan’s “Notes on 《Camp》” will be read together with the audience, and the performance will be accompanied by an element of happening by the artist, poet, and curator. No photography will be done, and the traces will be published in the form of a newspaper. The demand for camping is increasing in the Corona Disaster. Away from the global Internet space, local bodies are placed in the darkness. Each recalled fire is started on the spot or remotely, such as online. Its appearance can only be known by actually seeing it.

The man-made island, reclaimed in the middle of the city, had been given such sounding words as “dream” and “peace”. It used to smell of garbage and flies flying around, on the other hand, it was a primary camp for prisoners of war and war criminals. And the remains of war were hidden in the bushes. A few small groups of people were BBQing at the campsite.
Susan Sontag, in her “Notes on Camping,” described “camp” culture in 58 entries. Camp” as an artificial and urban sensation.
In order to tease out the senses–especially the living and powerful senses–with words, we must avoid judgment and behave flexibly. (Susan Sontag, “Notes on ‘Camp,'” translated by Yasuya Takahashi, Hiroshi Izubuchi, Kimi Yura, Hiroshi Ebine, Joichiro Kawamura, and Tetsuo Kishi)
What can we entangle from the 58 items that follow? I move little by little. Someone’s voice is heard. Reactions continue to chain together until morning. I don’t know whether it is stopping or moving. Something seems to be happening, but it is not. Time moves little by little. Something invisible is happening in an invisible place.
Shalek: I’ve finally done it, I’ve finally made it this far. Again, what interests me here is the overall humanity, this one thing. But this, this scene, what is this, culture? It reminds me of a shopping district in downtown Vienna that was burned to the ground, no wonder it was destroyed. This is a pity, and a photo cannot do it justice. …… (Karl Krauss, “The Last Days of Humanity,” translated by Nori Ikeuchi)
How can we notice the anomalies in the uniformity and social order brought about by the state and the city? Karl Krauss published the critical journal “Die Fackel” (The Torch) from 1899 to 1912, which reported on the society of the time through satire. The articles were drawn from letters and street voices, and were later collected into a play, “The Last Days of Mankind”.
How will the fire that the people gathered there try to start be lit in the darkness? The torch of poeticism, ironic criticism, and resistance to assimilation will be lit.

During the campfiring, the performers’ performances were recorded using prints.
1 Before the start of the performance
Visitors were given curing blue mats cut to a length about their height. Visitors lay on the mats as if they were surrounding a campfire.

2 KIROKUGAKARI
KIROKUGAKARI
There was no recorder at the venue and the performances were made remotely. 3 different performances were made by the audience at 23:00, 2:00, and 4:00. There were several coincidental connections with other artists.
After the three performances, I engraved three times on one plate. I used as motifs the letters projected in a smart phone, the performer Yu Yamamoto, a red vest, a letter about the mechanism of combustion, and a thin stick on fire.

3 Ayaka Ura (1)
The clay was handed to the participants as the artist mumbled her memories and feelings about the clay. While kneading the clay with their fingertips, the participants watched the fire in the center of the room and the artist’s movement.

4 Aoi Tagomi
I heard a squeaking sound. It was shortly after the performance near the fire, and visitors were enjoying conversation near the fire. The squeaking sounded like a monkey, a creature that should not be here. I listen carefully and go toward the voice. Away from the fire, I reach a tree that is not well lit. The voice comes from the top of the tree. I see a hand with rubber gloves on, and for a moment, I can see a hand around the trunk. If I listened carefully, along with the squeaking, I could also hear insect sounds like bleeps and bibbies. I also thought I heard a bird call, “foo,” but I could no longer tell which voice was that of Heki Tagomi. In the darkness, where there was little light, I could hear countless sounds.

5 Ad Mornings(1)
Around the campfire, short canvases were placed in a circle. The canvases were numbered and the time was painted on them.Ad Mornings record campfiring. They were recorded on those canvases. Three people were writing on those canvases, squatting side by side. The bonfire in the center was illuminating Ayaka Ura, who was performing, but at the same time the people recording were also illuminated, and large shadows were stretching out.

6 Akira Aoki
Aoki put a sticker on a park sign that read “You must talk campy. client” and began talking with Ura Ayaka about CLIENT. When Aoki told Ura to talk to campy, Ura said, “It’s hard to talk to campy, it would be perky.” He said.

7 Daisuke Kuroda
The artist was performing throughout the show with his presence removed. The audience was instructed to put the food they were given into a bonfire in the center of the room. Actually, I was made to play the role of clapping my hands to interrupt the conversation during the performance, but no one seemed to notice.
I watched it and carved the central fire, palm and mushroom on the screen.
A few hours later I heard the conversation, “That’s not the real Mr. Kuroda, that’s a totally different person.”

8 Takuya Takemoto
Takuya Takemoto’s performances, which move back and forth across the venue at a speed that makes it difficult to tell whether they are moving or standing still, are so integrated with the landscape that we sometimes lost track of them. Just when I thought I had finally found him, I witnessed the moment when the artist’s silhouette was assimilated with the surrounding grove of trees by a distant lightning flash.

9 Ayaka Ura (2)
As Ura Ayaka said, “I am holding hands with the fire” in the ongoing narrative while holding a wooden stick over the fire, she walked around the perimeter in circles, guided by the movement of the fire. Smoke was rising from the end of the wooden stick that she was holding.

10 Shota Yamauchi
Yamauchi captured Fahrenheit 451 and projected the burning of each captured photo on the screen using a projector. The photographs, which became the burning dregs of the Fahrenheit 451 captures one after another, were scattered around the area.

11 Marina Komiya
She came in a cloth-like garment. Eventually, her neck was pulled back into the cloth, and her head was also hidden. Lighting shone from inside the cloth. The light vaguely reflected the lines of the body on the surface of the clothes (cloth). The artist talked about clothes, nakedness, membranes, holes, rivers, and boundaries. I was impressed by the words, “They do not melt together, but increase.

12 Yuu Yamamoto
Yuu Yamamoto’s All Night Yu Yu Wide broadcast ended at an empty kitchen. When ending an online conference, it would be nice if zoom had a function to disconnect while fading out slowly. He said something like that at the end.

13 Kanie Naha
Ayaka Ura was building a bonfire in the center of the room. The artist lay right next to the fire. He seemed to be taking his time to decide the distance from the fire. He began sign language while listening to the audio recorded and stored on cassette tapes at the venue. By the time the tape finished playing the most recent notes and the artist opened his eyes and got up, the sky had begun to lighten a little.
私はうらあやかの足元と細い棒、実際の火はではなく炎のようにも見えるカニエ・ナハの手を版画に彫った。

14 Ad Morning(2)
After all the performances, Ad Morning came to distribute newspapers. They were constantly recording what was happening, so I guess they had just finished printing and came here, including even the events that had just occurred. A curing blue mat was laid out on the ground, and a bundle of paper divided into three pieces was placed on it. Upon closer inspection, it seemed that the printed contents were all different. Ad Morning took one sheet from each of the three bundles, rolled it into a cylinder, and tied it closed with a string. Soon, the visitors did the same, taking three newspapers as well. The cylindrical newspapers were distributed to the visitors. 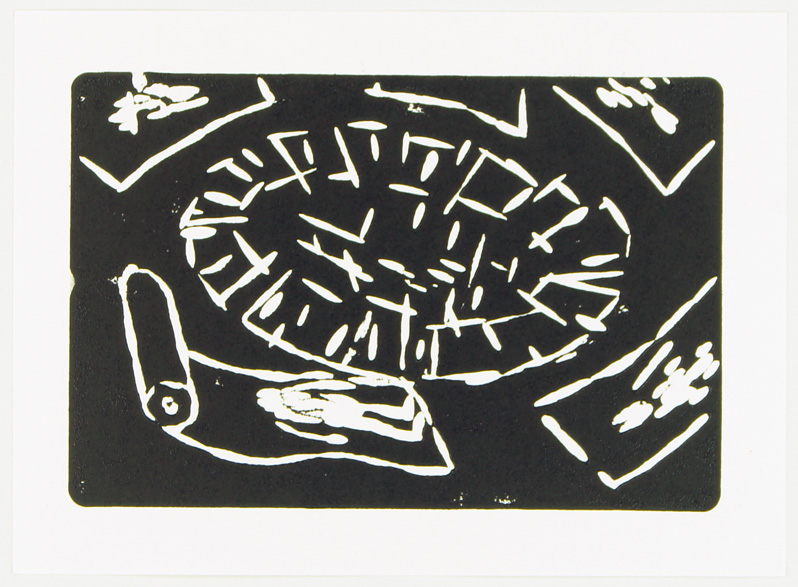 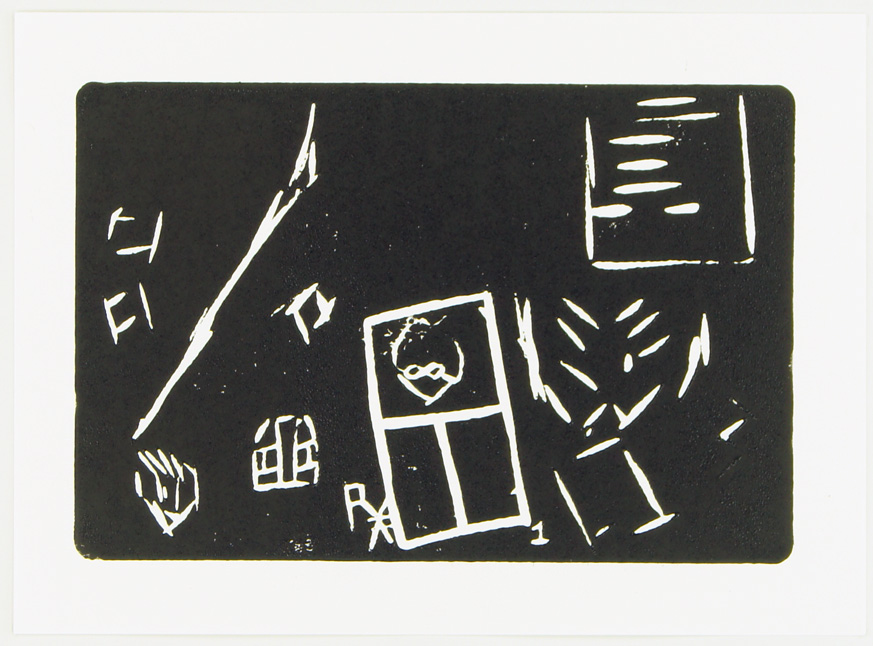 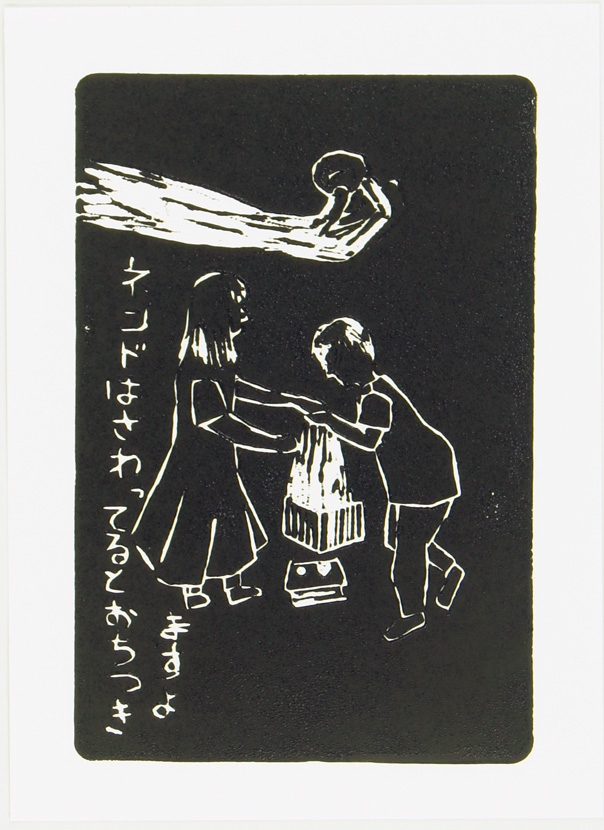 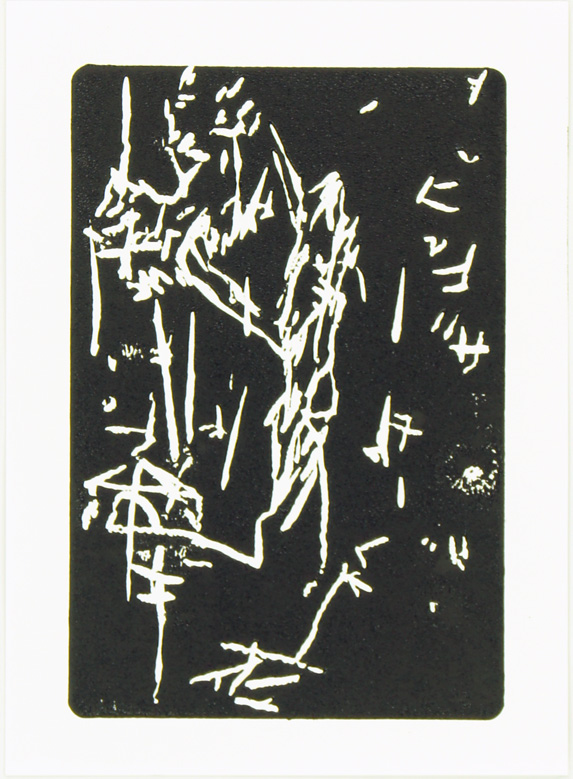 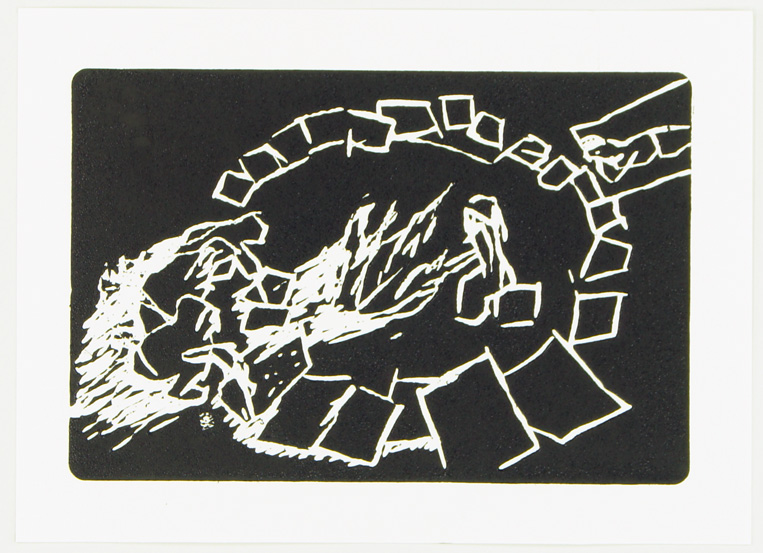 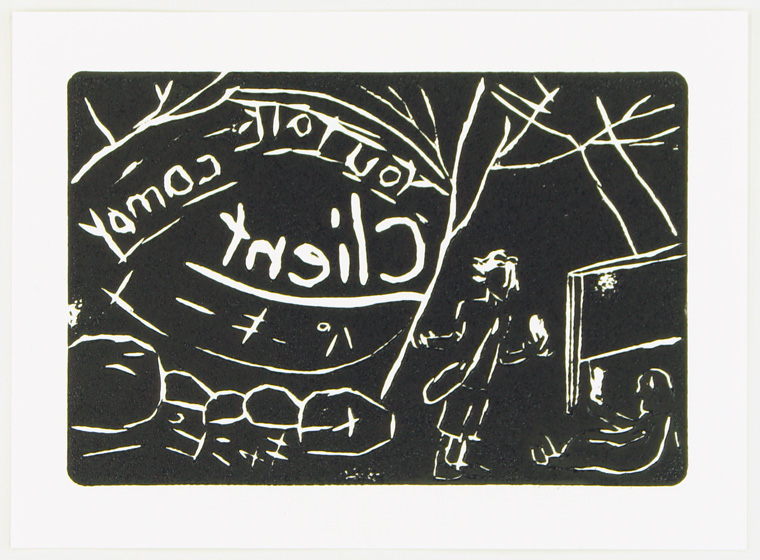 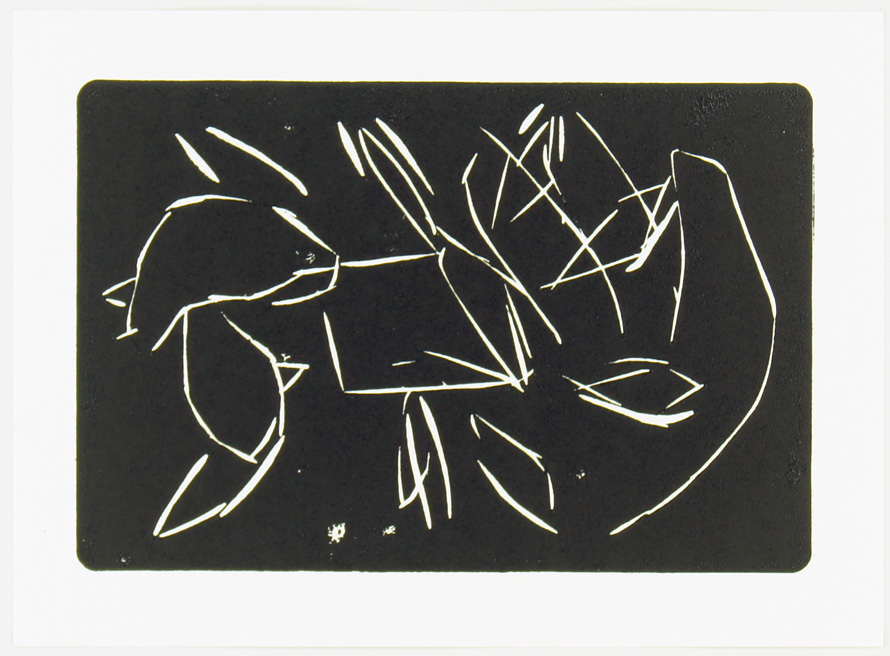 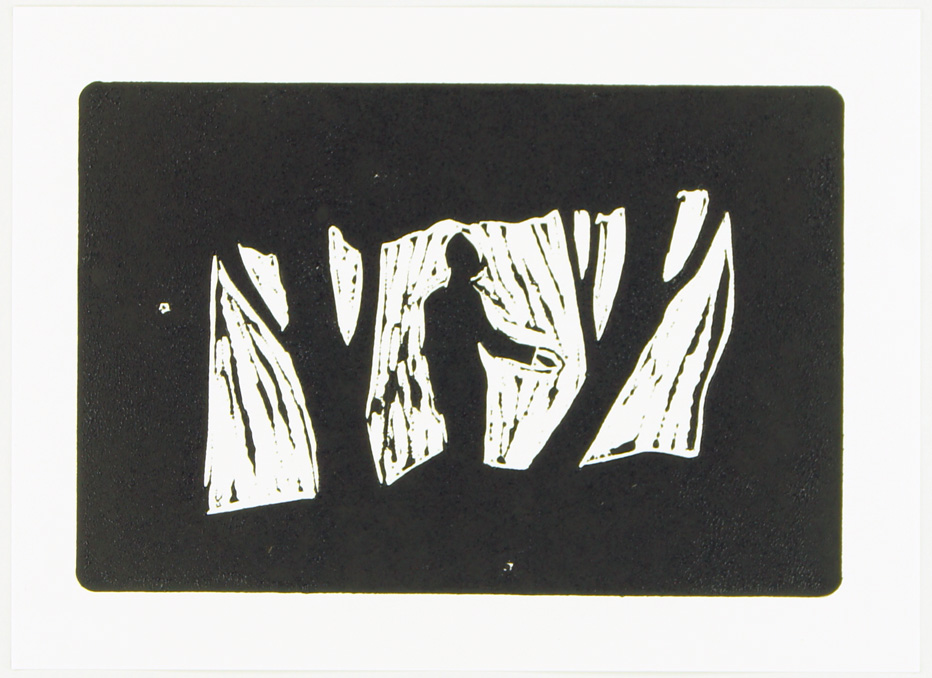 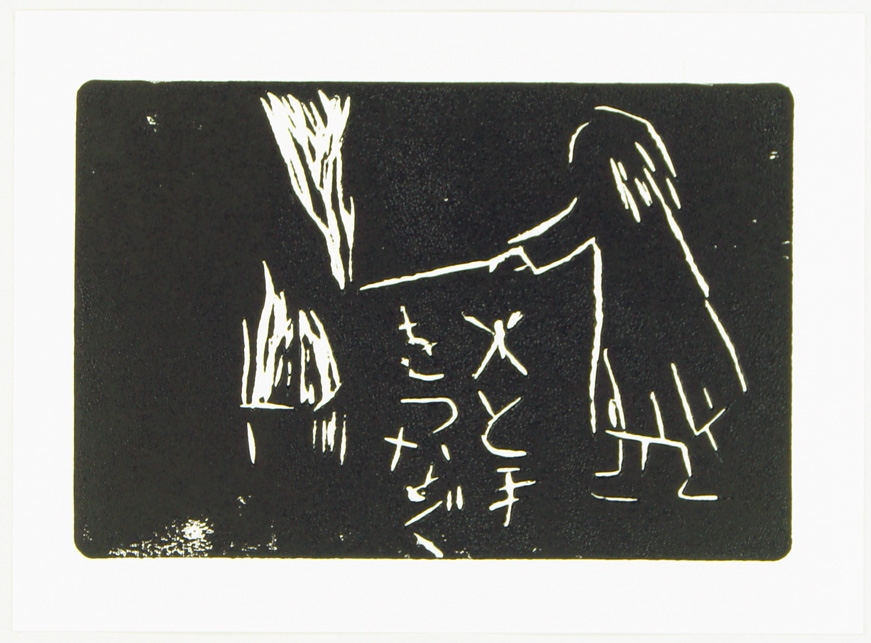 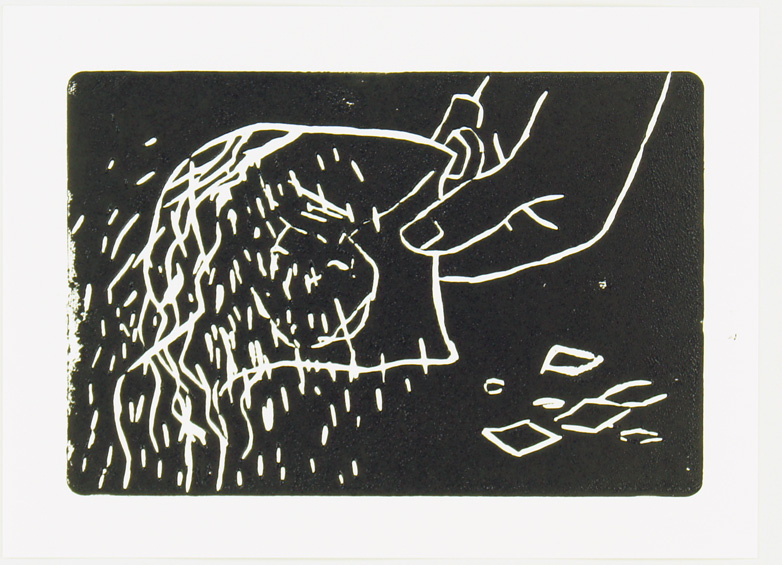 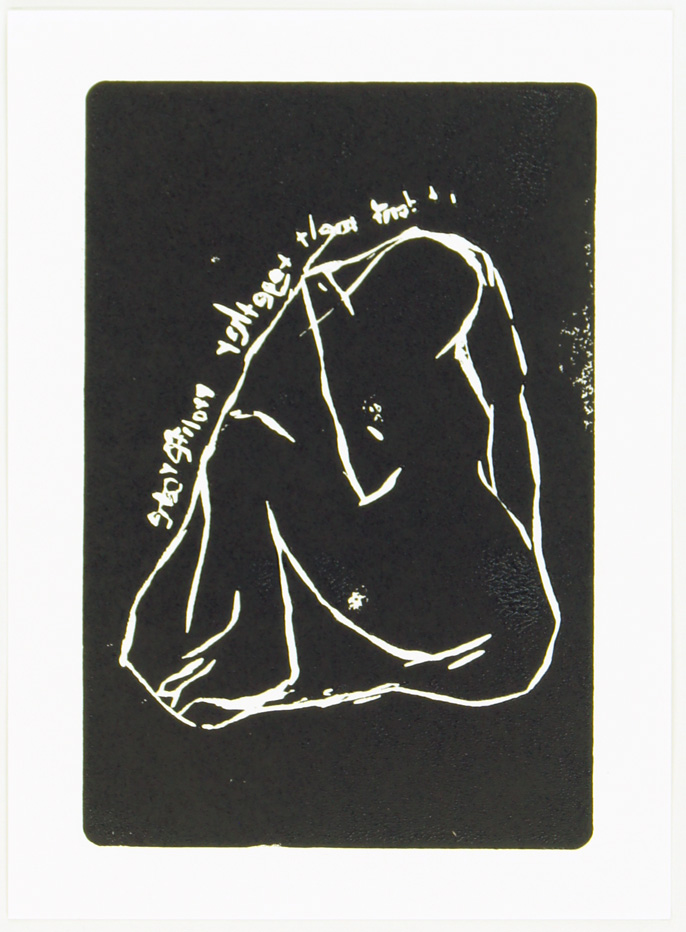 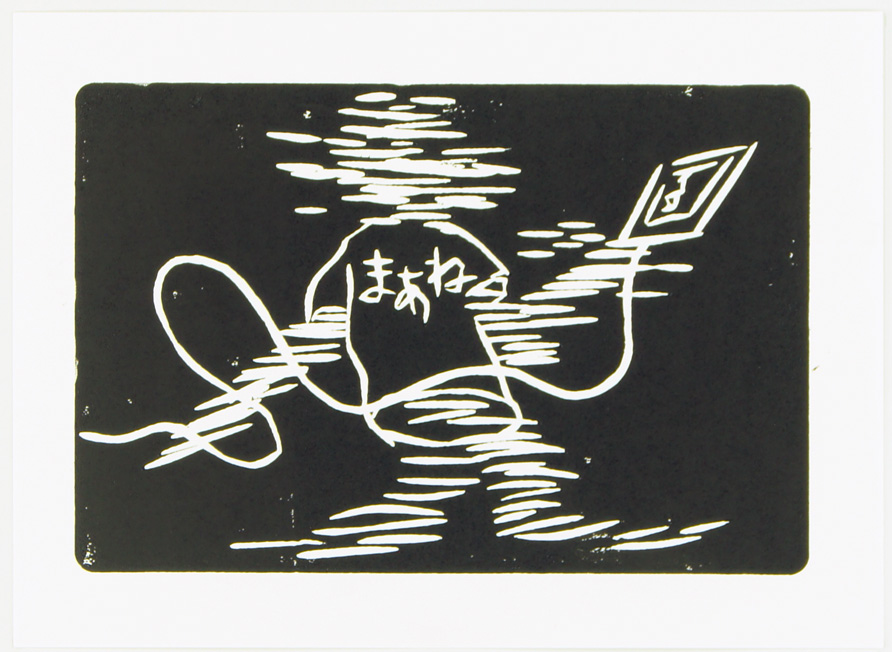 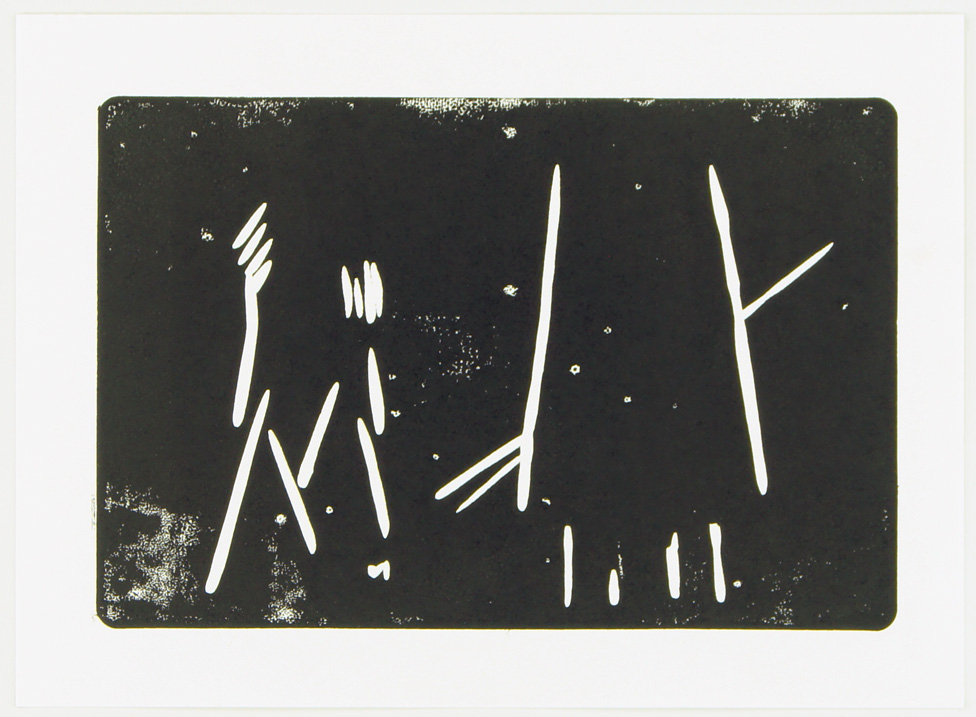 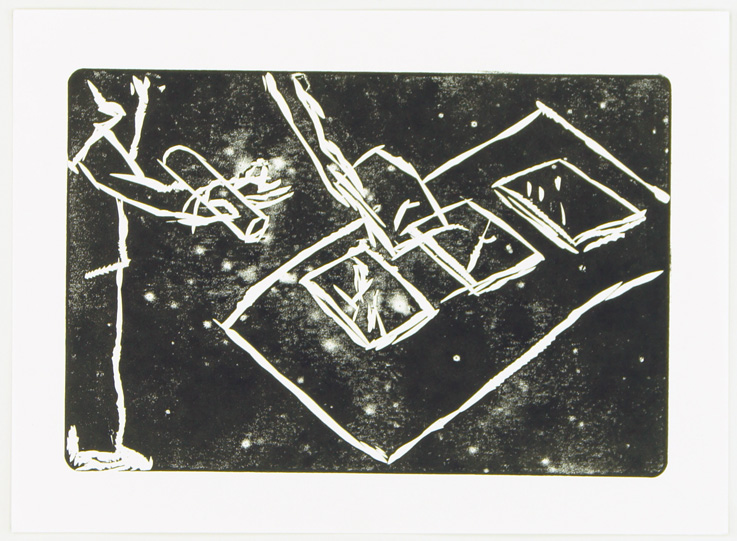